PROTECT YOUR RIGHT TO RACE!

THE EPA IS BANNING RACE CARS. TELL CONGRESS TO PASS THE RPM ACT AND STOP THE EPA FROM DESTROYING MOTORSPORTS. YOUR MEMBER OF CONGRESS NEEDS TO HEAR FROM YOU! 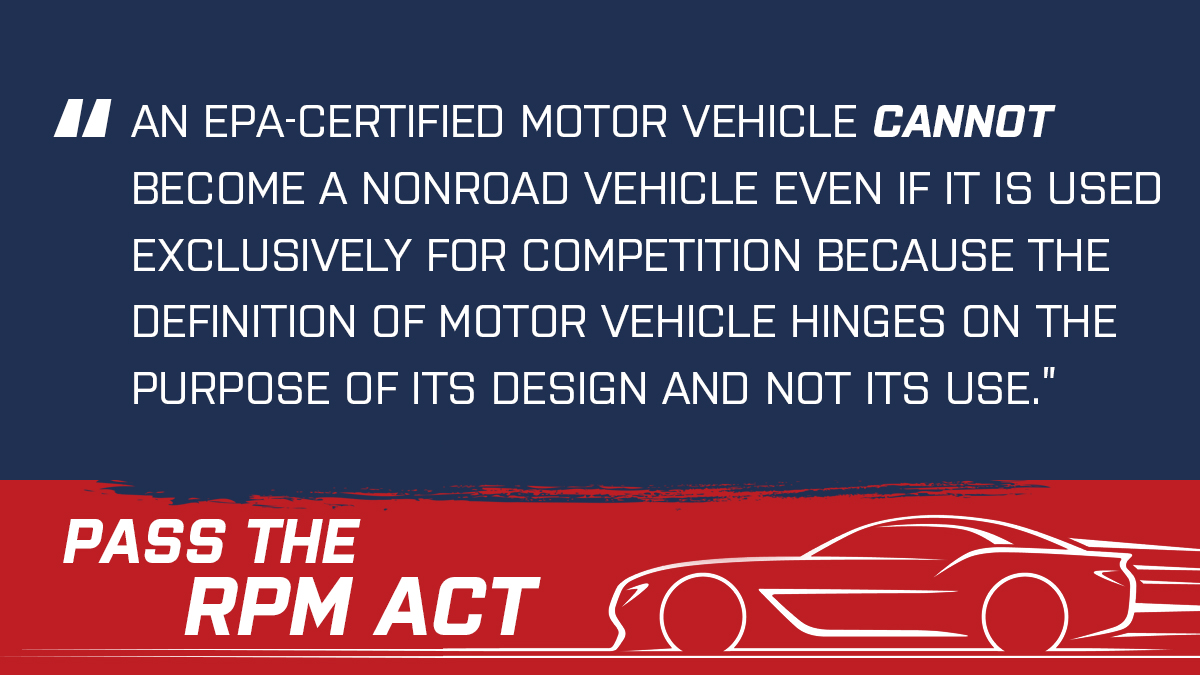 Street vehicles—cars, trucks, and motorcycles—can't be converted into race cars according to the EPA. The EPA has announced that enforcement against high performance parts—including superchargers, tuners, and exhaust systems—is a top priority. Even if you are one of the hundreds of thousands of enthusiasts who contacted Congress in the past, we need your support again! Tell the bureaucrats in Washington that race cars are off-limits!

HOW YOU CAN HELP

There has already been an unprecedented outpouring of support for the RPM Act this year, with Americans sending over 1.3 million letters asking Congress to pass the legislation. Now that H.R. 3281 has been reintroduced in the U.S. House of Representatives, it is imperative that enthusiasts and motorsports businesses keep up this momentum to get a companion bill introduced in the Senate and urge lawmakers in Washington, D.C. that they must act now to protect the right to convert a motor vehicle into a racecar by voting to pass the bill.

Use our Action Center to send a message to your Senators and Representative to ask them to support the RPM Act.

PRI members can help spread the word by including links on their websites, social media platforms, storefronts, and garages. Members can also rally their customers, employees, followers, and friends to act. Use the assets found in PRI's digital toolkit. And don't forget to join the conversation on social media using the hashtag #SaveOurRacecars.

The RPM Act of 2021 (H.R. 3281), is common-sense, bipartisan legislation to protect Americans' right to convert street vehicles into dedicated race cars and the motorsports-parts industry's ability to sell products that enable racers to compete. The bill clarifies that it is legal to make emissions-related changes to a street vehicle for the purpose of converting it into a racecar used exclusively in competition. It also confirms that it is legal to produce, market and install racing equipment.

The RPM Act reverses the EPA's interpretation that the Clean Air Act does not allow a motor vehicle designed for street use—including a car, truck, or motorcycle—to be converted into a dedicated racecar. This American tradition was unquestioned for 45 years until 2015 when the EPA took the position that converted vehicles must remain emissions-compliant, even though they are no longer driven on public streets or highways. Although the EPA abandoned efforts to make the policy a formal regulation, the agency still maintains the practice of modifying the emission system of a motor vehicle for the purpose of converting it for racing is illegal. Manufacturing, selling, and installing race parts for the converted vehicle would also be a violation. The EPA has also announced that enforcement against high performance parts—including superchargers, tuners, and exhaust systems—is a top priority.

Converting street vehicles into dedicated race vehicles is an American tradition dating back decades and has negligible environmental impact. While California is known for having the strictest emissions laws, the state exempts racing vehicles from regulation.

Motorsports competition involves tens of thousands of participants and vehicle owners each year, both amateur and professional. Retail sales of racing products make up a nearly $2 billion market annually. Most of the vehicles raced on the estimated 1,300 racetracks operating across the U.S. are converted vehicles that the EPA considers to be illegal.

The RPM Act does not interfere with the EPA's authority to enforce against individuals who illegally install race parts on vehicles driven on public roads and highways and companies that market such products. Tampering with the emissions system of a motor vehicle used on public roads is a clear violation of the Clean Air Act.

The RPM Act will provide the racing community with certainty and confidence in the face of an EPA interpretation of the Clean Air Act that threatens to devastate an American pastime and eliminate jobs in our communities. To see a list of current RPM Act co-sponsors, visit here.