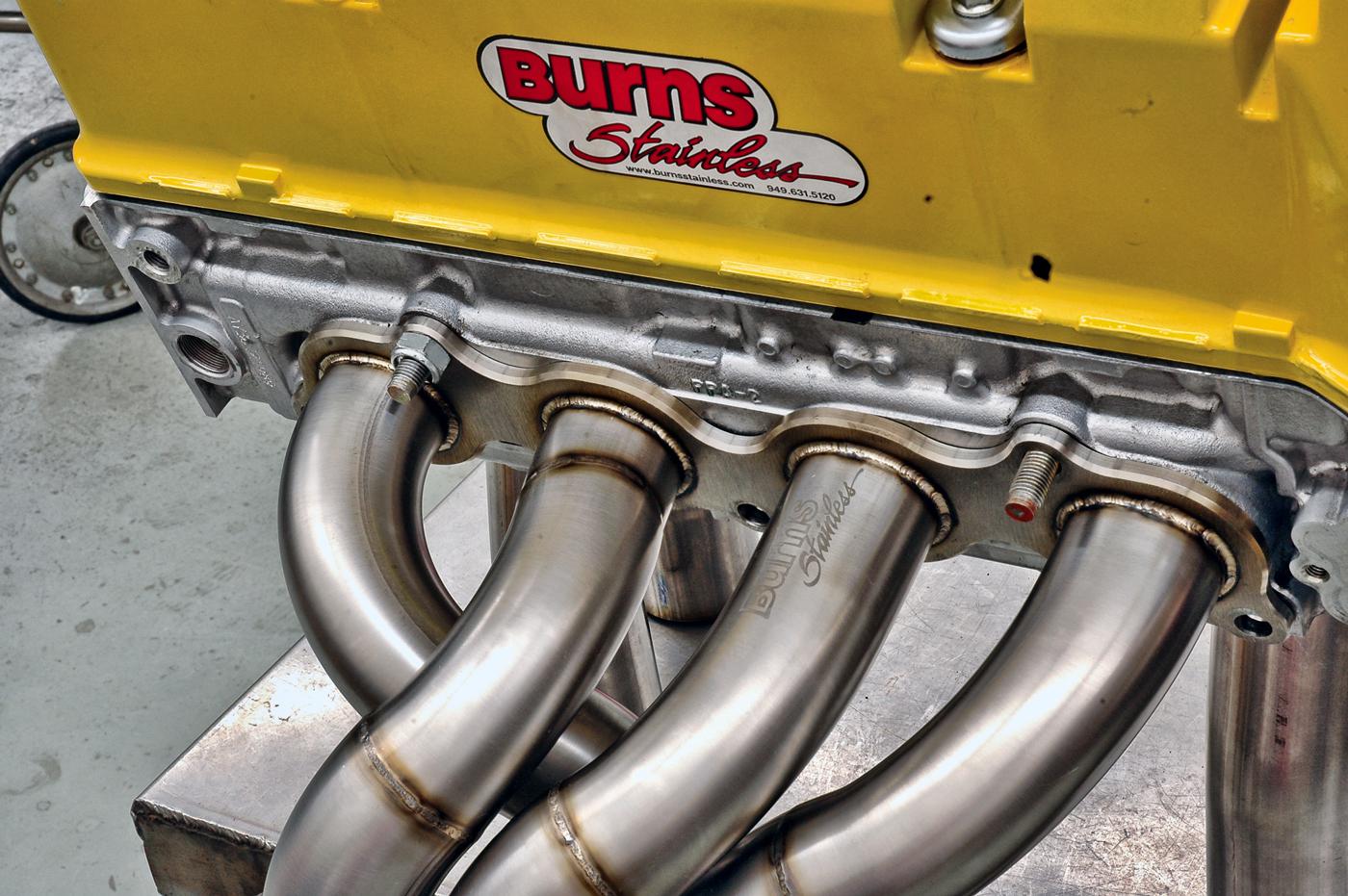 The idea that a pipe needs to be large in order to get a lot of exhaust gas to flow out of the cylinder is “not really the case,” said our source from Burns Stainless. “It needs to be the correct size,” he added.

Bigger isn’t necessarily better, as factors like engine rpm, camshaft choice, transmission, and more should be carefully considered in order to maximize performance.

Racers tend to believe that, especially when it comes to engine components, bigger is better. The quest for ultimate power means stuffing as much air and fuel as possible into an engine, and then venting its waste through sewer-pipe-size headers.

While there is certainly some validity to that bit of tribal knowledge, it doesn’t hold true 100% of the time, especially on the exhaust side of the equation.

“There’s a notion that, in order to get a lot of exhaust gas to flow out of a cylinder, the pipe needs to be large,” explained Vince Roman of Burns Stainless, Costa Mesa, California. “But we find that’s not really the case. It needs to be the correct size.”

“Racers want to make horsepower, and big-tube headers typically make top-end power,” said Chris Hill of Specialty Products Design, Rancho Cordova, California. “But a properly sized header takes into account how the engine will be run. Where do you want the engine to make torque and horsepower?” Because big-tube headers “don’t start working until further up in the rpm band. A Pro Stock car running at 10,500 rpm may like that, but a Super Gas car running on an index likely won’t.”

“There are a couple things going on,” Roman said when explaining why a big pipe may not always be a better pipe. “One is scavenging. With a very large exhaust pipe on an exhaust port, when the exhaust port opens and the exhaust starts flowing out, recirculating eddies form out of the exhaust port. That is an energy waster.”

Another important factor is “keeping the velocity of the gases sufficiently high so that the gases will have a lot of momentum as they flow out of the port,” he continued. “One way to think about that is when you put a nozzle on a water hose. The nozzle increases the velocity of the water and actually throws the water out further.

“The nozzle reduces the amount of flow through that hose,” he noted. “An open hose will flow more than one with a nozzle on it, but the nozzle will push it out further. It’s all about finding that happy medium, balancing the exhaust flow rate with exhaust header flow capacity. If you don’t, the exhaust gases will not have a lot of momentum, so at the end of the exhaust stroke and at the beginning of the intake stroke, there will be a lot of exhaust gas still close to the exhaust port. When intake filling starts to happen and pressures lower in the cylinder, the exhaust gases that haven’t traveled very far from the cylinder will be sucked back into the cylinder, giving you a less explosive charge for the next cycle.”

Hill also noted there are other elements at play in the exhaust setup, including collector types, “that would have an influence on how the header is finished. That’s a whole different conversation.”

Another factor with an influence on header size is whether the engine is naturally aspirated or has a power adder, Roman said. And if it’s the latter, what type of power adder is being used.

“The scavenging portion of the cycle becomes less important since a power adder, like a positive-displacement blower, provides much more cylinder-filling pressure than a scavenging wave,” he explained. “There aren’t such low pressures in the cylinders during the intake stroke because there is so much pressure filling them.”

Scavenging is still an issue “with nitrous and centrifugal superchargers,” he said. “At part-throttle and low rpm with a centrifugal supercharger, the cylinder-filling pressures aren’t as high as they are at higher rpm. You still want to have good throttle response when it’s not up to full boost. Exhaust scavenging will help here.” The same holds true with a nitrous system, as the racer isn’t always “on the nitrous. A well-designed exhaust system will provide better throttle response in that case.”

Both Hill and Roman recommended racers take advantage of the exhaust companies’ expertise when it comes to properly sizing headers. “If a racer is honest about his or her usage, most reputable companies can assist in a choice,” Hill said.

Meantime, Burns Stainless has a computer program “that sizes headers and collectors based on engine parameters and combinations,” Roman said. “Using our algorithm, we can calculate proper exhaust tube size and get the length of the header and the collector sizing so that it works with that particular engine combination.”

“But some of this stuff is still trial and error,” Hill pointed out. “For instance, there are all kinds of combos in Competition Eliminator. You better be on your game to even be competitive.”

“The exhaust system doesn’t make or break a race car,” Roman admitted. “There’s a lot that goes into it. But if somebody has a big header, and he’s running first in his class, everybody wants to run everything that guy has. We still see these cycles, but we try to stay tried and true to what we espouse. It works for us and our customers.” 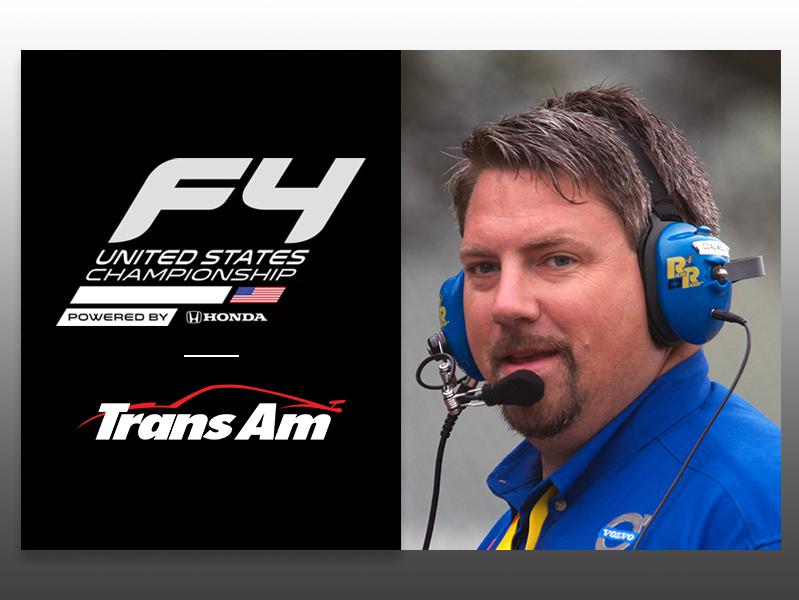 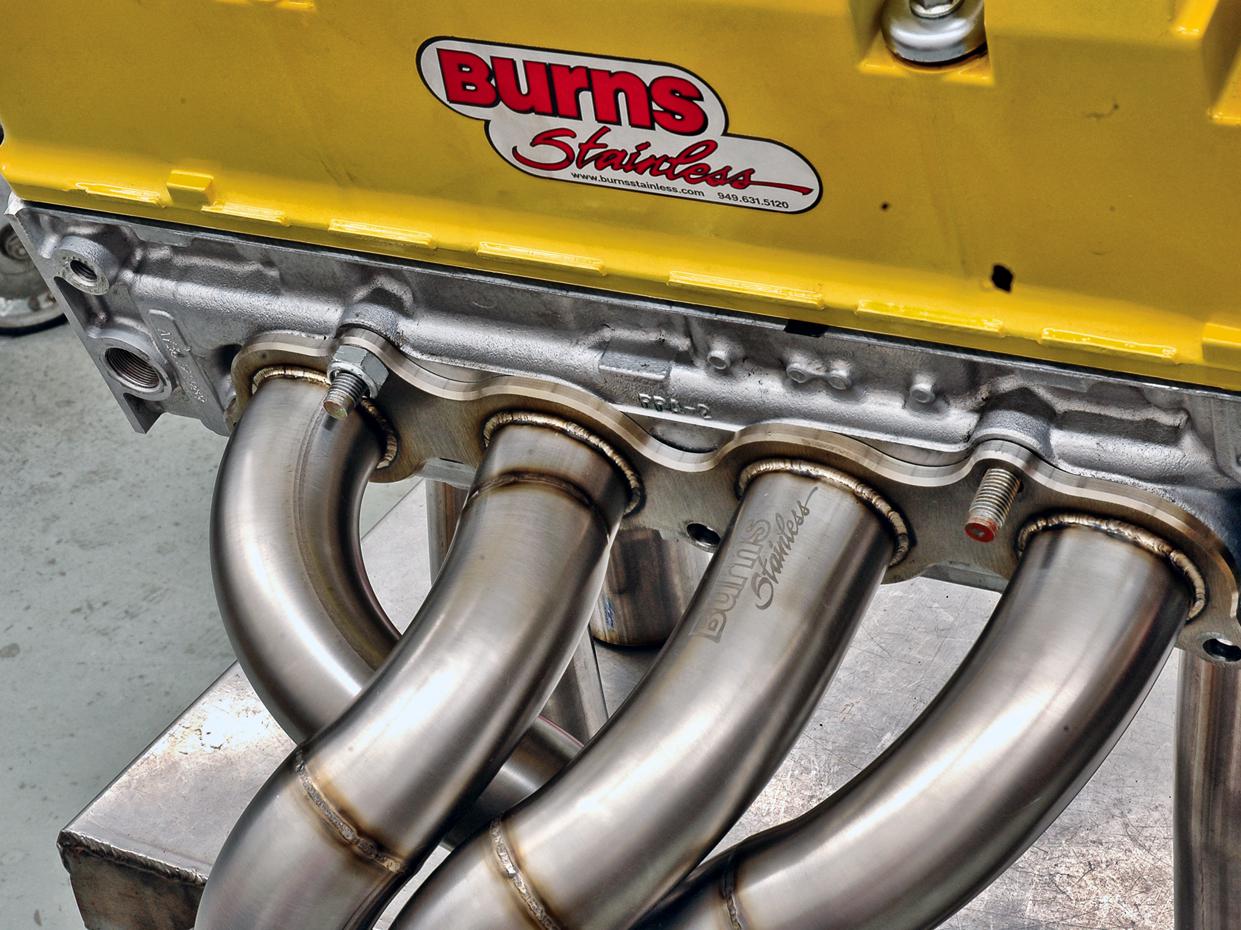